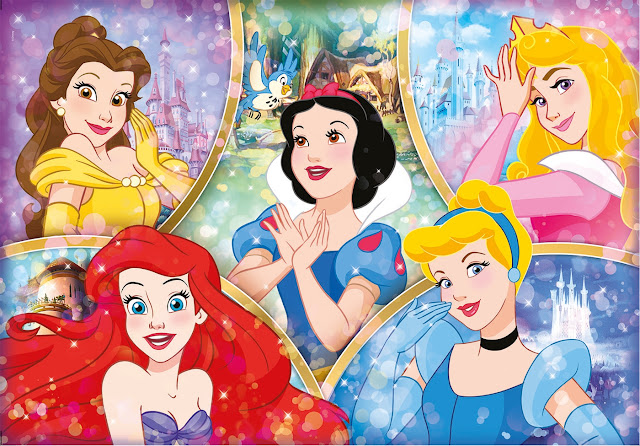 “Princess culture is criticized for contributing to gender stereotypes and poor body esteem, however, there is little longitudinal research examining these claims. This study examines associations between engagement with princess culture during early childhood and gender stereotypes, body esteem, and adherence to hegemonic masculinity in early adolescence (..) The lack of longitudinal research is important because many of the outcomes relevant to princess culture, such as body esteem and gendered behavior can intensify in later years, particularly around the onset of puberty”

“For media, parents were asked to rate how often their child “viewed either television programs or movies (including DVDs) portraying Disney Princesses” on a Likert scale of 1 = never to 7 = 2–3 times a week. For identification, parents were shown a picture of all the current Disney princesses. Parents were first asked to indicate their child’s favorite princess and then to indicate how much their child identified with that princess on a scale of 1 = not at all to 7 highly identifies with. Finally, for toys, parents were asked to indicate how frequently their child played with toys relating to any Disney Princess, on a Likert scale of 1 = less than once a month to 7 = 6 or more times per week. Children completed these questions in reference to themselves at Wave 2. A latent variable of these three items was constructed to represent engagement with princess culture at both waves.” 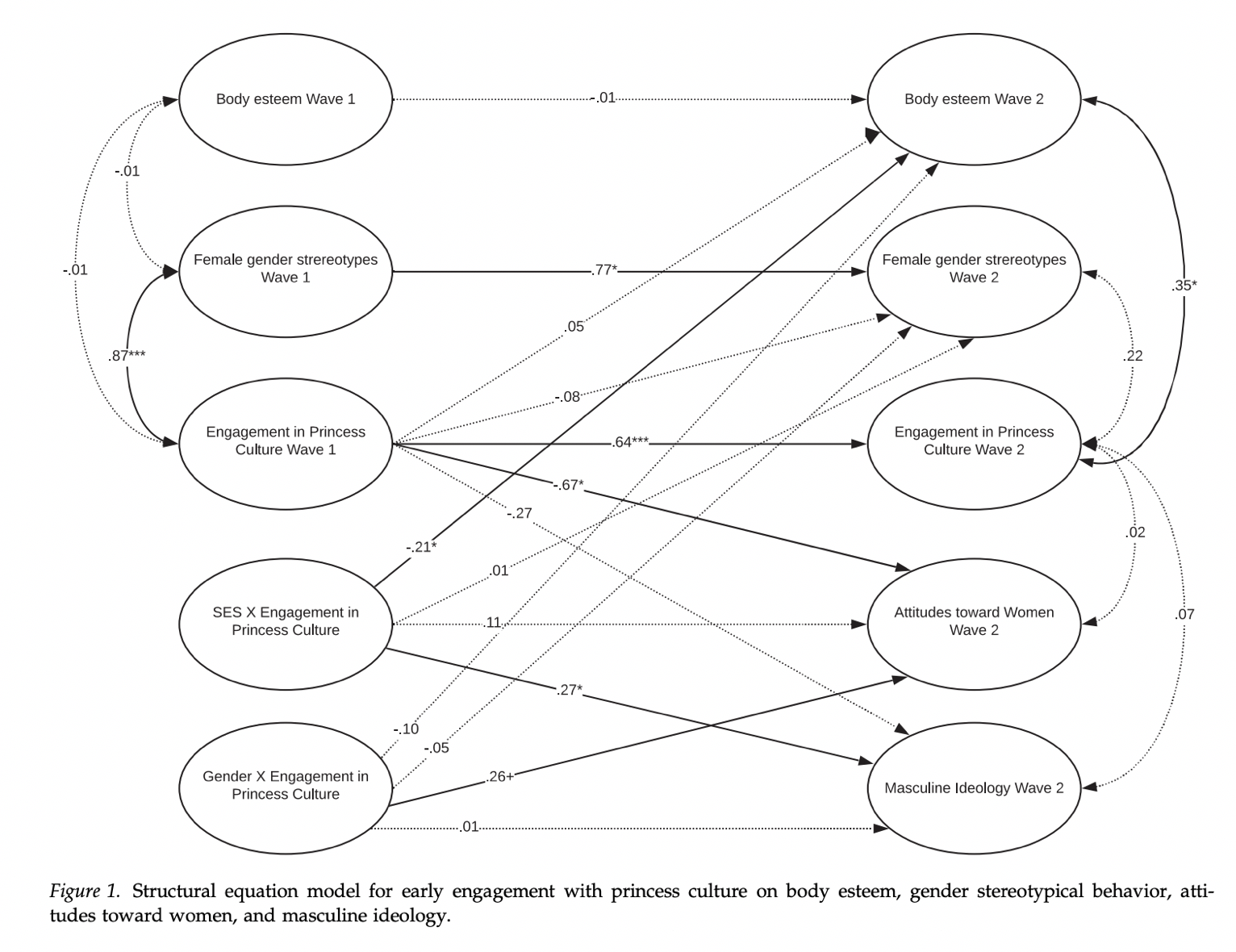 1. “We hypothesized that early engagement in princess culture would be associated with more feminine gender-stereotyped preferences for toys and activities and more endorsement of stereotypically feminine traits as well as an increase in negative body esteem for girls in early adolescence.”

2. “Additionally, we hypothesized that early engagement with princess culture would be associated with less endorsement of hegemonic attitudes toward women and less adherence to masculine ideology for boys during early adolescence. ”

3. “We also hypothesized that early identification with highly gender-stereotyped princesses would be associated with greater adherence to feminine gender stereotypes and as adhering more closely to hegemonic masculinity norms.”

“Specifically, higher engagement with princess culture during the preschool period was associated with holding more progressive attitudes about women (particularly for girls) and subscribing less to norms of hegemonic masculinity within the context of interpersonal relationships for those coming from lower SES (socioeconomic status) environments. In other words, children who engaged highly with princesses during early childhood tended to show less evidence for attitudes consistent with hegemonic masculinity—defined as strict adherence to gender roles that support the existing culture and norms that favor dominance by men, sometimes using socially destructive behaviors in the process (e.g., Parent et al., 2019). Girls who highly engaged with princess culture during the preschool years were more likely to view educational opportunities, relationships, and careers as being equally important for men and women. Additionally, those children coming from lower SES homes and who engaged with princess culture were less likely to hold a less masculine ideology in the context of interpersonal relationships. For example, they tended to be more supportive of allowing individuals to feel and show emotion in relationships, instead of demanding that they shut down their feelings and were less likely to feel that they had to fight someone if they were challenged. Surprisingly, and contrary to hypotheses, early involvement in princess culture was not associated with later adherence to female gender stereotypes regarding characteristics and behaviors.”

“Engagement with princess culture did not have a longitudinal effect on adherence to traditional feminine stereotypes over time. Other research has found that high engagement with Disney princess culture was associated with greater adherence to feminine gender stereotypes, particularly for girls (Coyne et al., 2016). This study was only 1 year in length and took place during a developmental period where thinking around gender tends to be more rigid (Martin & Ruble, 2010). It may be that individuals focus on the more visible “girly” aspects to the princesses during early childhood, especially when paired with the merchandise (e.g., dolls, dress ups) that is common at this age. Thus, princess culture might initially intensify gender stereotypes early in development. (…) Other possible explanations for these findings emerge when considering the social cognitive theory of gender development. With regard to media influences on behavior, this theory emphasizes that the likelihood of imitation of a model is dependent on the reinforcement of the behavior.”

“Finally, we found that princess engagement was associated with higher body esteem across development, specifically for those coming from a low SES (socioeconomic status) environment. This finding was unexpected and went against the hypotheses that princess culture would have a negative impact on body esteem. Notably, our findings support previous experimental (Hayes & Tantleff-Dunn, 2010) and short-term longitudinal research (Coyne et al., 2016) showing that princess exposure does not negatively impact body esteem. Indeed, our research demonstrates that it strengthens body esteem longitudinally and during a developmental period when the pubertal process makes body esteem concerns particularly intense for some individuals (Hughes et al., 2018). It was interesting that this finding was stronger for those coming from a lower SES background. Princess stories may be empowering on many different levels, with many “rags to riches” stories being told (e.g., Tiana, Cinderella, Belle, Rapunzel, Princess Sofia). Many of the stories involve working hard to pursue one’s dreams, overcoming difficult challenges, and finding inner strength, focusing on what the individual can achieve instead of what she simply looks like. These messages fall broadly in the scope of the body positivity literature (e.g., Tylka & Wood-Barcalow, 2015) which supports the development of body appreciation and high esteem.”