Three theories or perspectives to look at art.

Using the three perspectives we can try to look at art as:

Something created intentionally, being able to communicate anything that will elicit a determined set of emotions in the receiver

In the beginning I was looking for the convergence between film and virtual reality. I had a path to follow, to do a profound film study of 3-4 movies related to virtual reality, analysing the future consequences of VR in reality, in life, society, film - in the end a cultural analysis.

Then I turned my interests to storytelling - narratives, the art of storytelling, stereotypes of narrative - more versed in art theories.

Then I looked at emotions, the way to build emotions in a videogame through storytelling - psychology is over my head.

In some way i've returned back to my prior quests before the PhD - Why is interactive content communication (like virtual reality) not as emotional as film?

Don't know where I'll be in the next couple of months. I feel that I need to focus, and above all to find a strong link between these works already done. I'll need to bang my head in looking for answers. Where is the goal, what is my final target, what am I trying to prove that nobody else have already tried?

Just know that I want something that mixes emotions, film, VR and storytelling. I also know that there are some people out there working in the same area and that probably already found some solutions. Maybe that I need to focus a bit more in a sub-area of all this 4 mixed areas... at the same time I'm afraid to go deeper because every time I've to write something (papers) on the area, I've to justify and explain everything in the beginning because not everybody is aware of the state-of-the-art in the 4 areas.

So, that's where I'm now. I'm working in the building of a straight line for this multidisciplinary PhD. Hope to find some answers till the end of the summer, in the between I'll have to finish the chapter on film study. 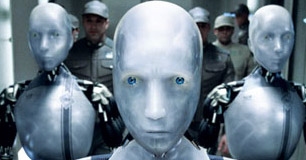 I, Robot by Alex Proyas

«Asimov... making machines an example of how the world could be bettered through the mastery of technology. ..The robot was artificial intelligence in a man's shape, a foil for asking what it means to be human and what rules should govern us.
...
The idea that we can take our social interactions and code them with an Asimovian algorithm ("allow no harm, obey all orders, protect yourself") is at odds with the messy, unpredictable world.
...
This need for people to behave in a predictable, rational, measurable way recalls Mr. Spock's autistic inability to understand human emotion without counting dimples to discern happiness or frown lines to identify sorrow.»

I presented the paper "Emotion and Suspense in the Interactive Storytelling".

I argued in this paper that we can develop suspense in both cinema and interactive storytelling but the emotional result from suspense diverge completely. Then I presented some new perspectives to allow some convergence in the emotional experiences in order to raise the amount of significance of the experience to the user.

I'll post soon the slides from the conference at my homepage.

"A model at Loews Theatres on Boston Common invites onlookers to watch a movie trailer on the flat-screen TV embedded in her T-shirt."