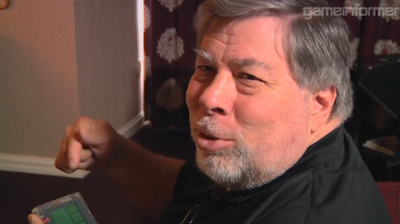 
There was a [color] TV set on the factory floor. They only used black and white TVs for their games, and this TV set wasn’t playing a game, but it had a dot going from left to right and right to left. As it moved, it was changing colors. I’m just sitting there thinking: color. It was hypnotizing, like a psychedelic light show at a concert. An idea popped in my head: a little way to put out a digital signal with ones and zeroes...my god, I have 16 different colors. There had never been a book that talked about color digitally. It wasn’t allowed. It wasn’t done. But I designed every single thing in the Apple II [to make] it possible. One little $1 chip could generate color instead of a $1,000 color-generation board – right out of the computer memory to the display. [That] was another trick I thought of that had never been done.This stuff had never, ever been thought of for a home computer that was affordable. But I just determined that my computer had to be a game machine. I called my BASIC [a programming language – Ed.] “Game BASIC.” You could go back on every note I ever wrote; I called it Game BASIC. My whole idea was, if you write a language that can play games, it can do all the things computers do, like financial stuff. I don’t know what companies use computers for; I only know what I like to use them for, and it’s games.

I knew that I had a machine with a microprocessor that could do a million things a second, move those bits around on the screen and make things move and play games and all. I thought, “I wonder, with my slow BASIC, can I write a game that’s playable?” Breakout. I’d done Breakout for Atari. I knew Breakout.

I built paddle hardware into the Apple II deliberately for the game of Breakout. I wanted everything in there. I put in a speaker with sound so I could have beeps like games need. So, a lot of the Apple II was designed to be a game machine as well as a computer. That is the way to get it to people, to get people to start buying these machines.

I called Steve Jobs over to my apartment, and we sat down on the floor next to the cables snaking into my TV that had the back off of it so I could get wires inside, and I showed him how I could change the colors of things, change the shape of the paddle, and change the speed of the ball with an easy BASIC command. He and I looked at each other – we were both kind of shaking, because we knew that the world of games was never going to be the same. Now [games] were software. Until then, there weren’t software games in the arcades. Now that animated games were going be software – oh my god. And [the fact] that a fifth grader could program in BASIC and make games like Breakout? This was going to be a new world; we saw it right then.